This evening I cleaned up my kitchen. Even seasoned my cast-iron pan with some flax oil I overpaid for today. And I must admit it came out really nice. Yes, I watched about a dozen (two dozen?) YouTube videos on seasoning cast iron pans yesterday evening, what’s your point?

Anyway, my clean kitchen. Go me.

Feeling rather successful I decided to reward myself with a cup of hot chocolate. 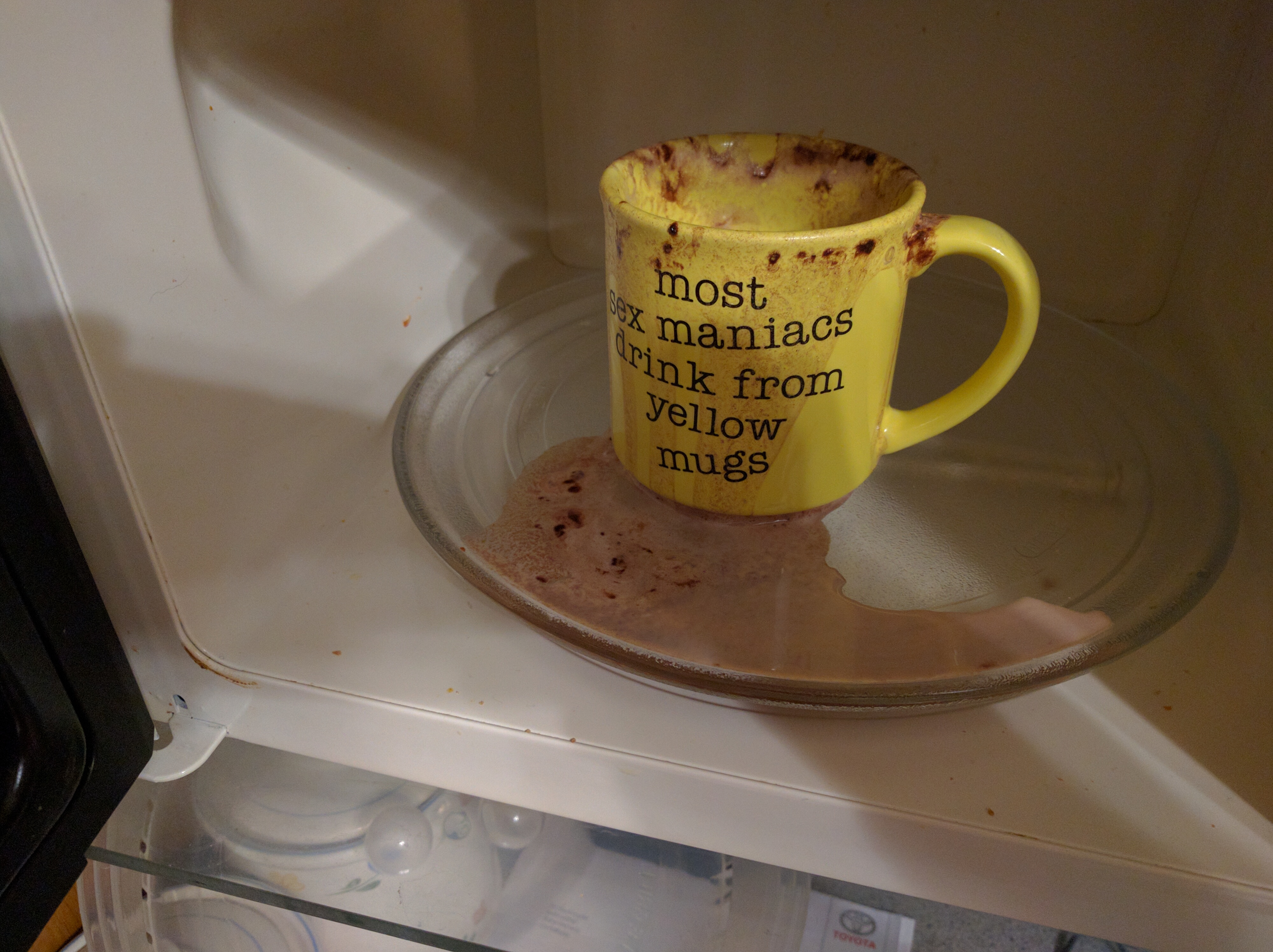 Unfortunately that was… not quite so successful. So I took that picture to the right, cleaned up and tried again - setting the time more carefully.

Being me I thought it would be an amusing Facebook post - a mini-Augean Stables tale but with me and chocolate replacing horses and poo. But I forgot the words on the mug.

So to explain… The mug was a gift. I got it in college. I’ll get to “who from” in a second.

At the time I was living in a house near campus with three other people. I worked with my girlfriend (G) at a convenience store. And my mom was up visiting - she stayed in my room and then I slept on the couch in the living room.

The day before I got the mug, I worked the evening shift. Myself and G closed up the shop (well, she closed it, I arsed around) and headed to my place. It was midnight or so when we got there and the house was dark. Everyone was asleep. We quietly went into the living room and as college lovebirds are wont to do, well, things happened. Not too much, but enough that you wouldn’t want anyone walking in.

Which of course was exactly who did walk in. G took an extreme interest in staring at the floor - a hobby I must admit had a lot going for it at that point. I can’t recall exactly what my mom said, but she wasn’t angry or anything. And at the end I remember a comment like, “you two should be careful, imagine if one of your housemates had come in.”

“Yes, wouldn’t that be horrible!” I thought sarcastically.

Mom went back to bed, G shot out of the house a second later and I tried to forget the past five minutes and sleep. The next morning my mom and I had breakfast. We were just chatting and I eventually noted how unfair it was because I knew something like that had never happened to her. Her mom had chased her down the yard, snapping her with a wet dish towel, for messing up a butter churn, I can’t imagine she’d survive getting caught making out with a boy.

Again, I can’t recall exactly what was said, but she wasn’t critical about it. Looking back on it now, we were both figuring things out. I wasn’t a teenage kid anymore and while I might not have been a fully functional adult, I was an adult. I might not have figured that out, but my mom had. In fact I think she pointed that out at the time. Your parent is always your parent, but eventually you’re not a kid. And I suspect for parents that’s a good thing - at least that was my mom’s view.

I went off to class and came back in the afternoon. My mom was clearly amused when I got home. She didn’t say why though. She said she’d made me tea.

Which is how I got the mug. She’d gone shopping.

My mom laughed and reminded me of what I’d said before; that it had never happened to her.

“But I thought about it and it had.”

My parents had lived in Salina, KS when they dated. I left there when I was 12, so I don’t know where couples in cars went to make out, but apparently my parents did. And they were there one time when, just like in the movies, a cop showed up. He wanted ID from both my mom and dad. My dad gave his up, but my mom from a small town in Ireland where everyone knew everyone balked. She wasn’t giving hers up. The cop pushed and my dad stood up for my mom and the cop relented.

So over that yellow mug, my mom told a story where my dad stood up to The Man for her. Go dad. And she survived - and so would I.

Going through her pictures after she passed away, I realised all her ID from that time had her in a habit. She knew Salina was a fair bit bigger than the small town she grew up in, but she also knew that ID would get gossiped about. 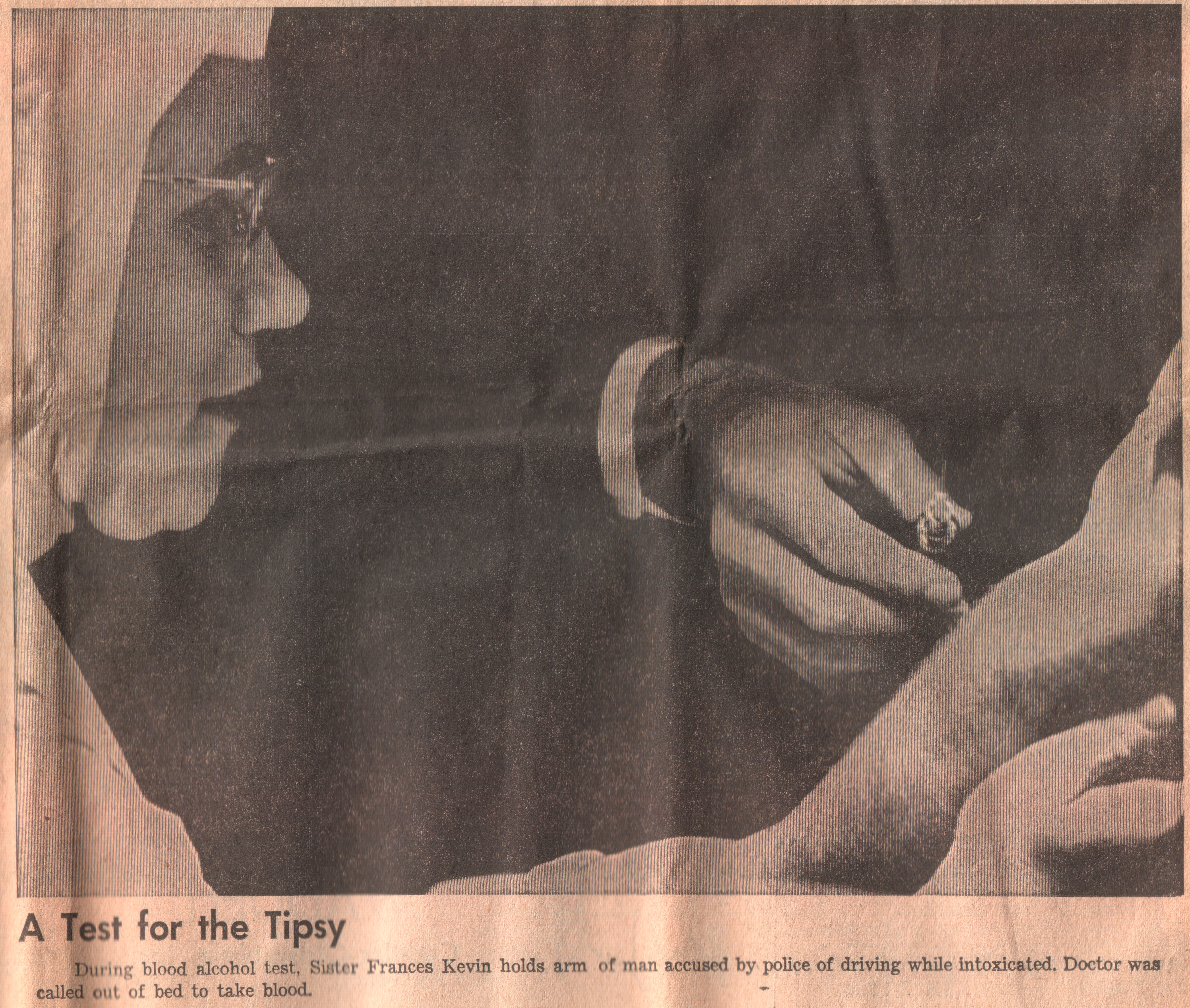 Amusingly I also came across this news clipping from “back in the day.” As a nurse chances are she had interacted with a number of cops over the years. ID or not I wonder if he relented less due to my dad’s valiant stand in her defense but instead because he remembered Sister Kevin.

I’ll never really know now, but we’ll give my dad credit for an assist at least.

A good day. Weird, but good.