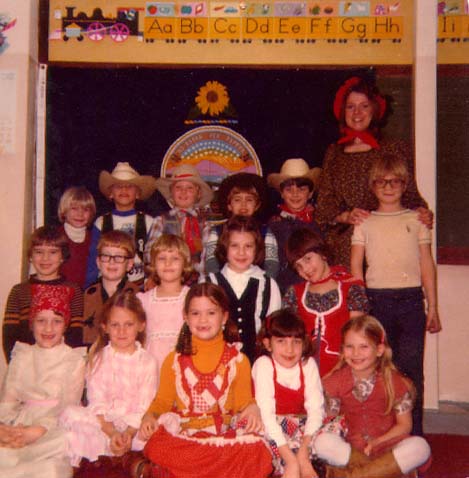 ok, my housemate just called me a dork for not having a web page. can't have that. i'll take geek (welcome it actually), but dork is just going too far. speaking of geek, this page is lynx friendly and designed with lynx in mind - in other words i try to keep non-standard html out of this page. feel free to send me email if you find a problem.

to the right you'll see a picture of me in first grade. you'll just have to guess who i am. and below you'll find a self-gif of myself that i made while playing around with some java demos.

kevin lyda, software engineer, on the 10th floor in the lowell office of unifi communications. i used to work in steve bowen's group in network transport services, mostly on the vfax and sched applications, but these days i'm one of santa's elves working on the nms portion of an hp/ux (pronounced h-pucks) project. check my resume (postscript, and text) for more information .

nearby you'll find my cube neighbor paul (man with much hardware, and fellow long-haired person); our resident rebel (w/o a long list of items) and amateur steelcase engineer doug; and a host of other malcontents. we tend to be pretty vocal in our opinions, but we can at times be subtle. i should note that we've lost paul. he's now at netscout with steve.

yes, i do have a life outside of work! i live in arlington with my gorgeous housemate, jessica hekman and a pageless mark millman. our house is chock full of old hardware running various unicies. among some of the people i hang out with we're known as the mean house thanks to jessica's friendly personality (it's not me, really. don't be a moron you freak.). specifically, the members of the mouse house and the freak house call us that. (the freak house is aptly named, that's all i can say)

i'm also an honorary member of the nda annex, though i don't show up as often these days. you'll occasionally find me at the burren in davis sq. with them, dental school friends, and almost always with a friend that drinks the meditech koolade (but keith and i will bring him to the dark side of the force - update - we succeeded).

i can't go on without mentioning a derivative of the one, true os. apparently some company in washington (d.c.? state? who knows.) has a competing os, but i haven't seen it. the distribution i use is redhat since it's a cinch to set up. as i mentioned earlier my home computers run unix, more specifically most of them run linux (not really unix, but close enough). two intel based linux boxes, and a sparc one. but an old 8086 runs minix. i might try out a freebsd system again some time, but home sysadmin issues begin to intrude on my time with too many os's.

to the right is a glimpse into the brain cell of kai the kitten one of the two cats i live with. not terribly bright ones either. kai is under the mistaken impression he's a dog - he'll play fetch for hours. little is somewhat more intelligent, next to kai she's a genius, but she has her own personality quirks. specifically, The Chair. i'd say she spends about 20 hours a day on it.

i have an interest in computer languages and how they model thought. lately i've been learning the slew of scripting languages that exist: perl, python, tcl/tk, bourne shell, etc. notice c-shell isn't there. bad stuff. i also explored smalltalk recently while ramping up for a possible new job, and to learn the pure concepts that lie behind the more popular (and impure) c++.

i love reading, though much of my reading time these days is spent reading manuals and textbooks. for those of you still in school, studying never stops. (but it's fun, really!) among my favorite authors you'll find stuart woods, david duncan, karen kijewski, stephen king, jessica hekman, jean auel and many others. lately i've been trying to read more irish writers. i exhausted enid blyton as a child; maeve binchy and roddy doyle as an adult. i'm open for suggestions. (yes, i know, joyce. i'm aiming for something lighter.)

for outdoor activities, i've been rollerblading for a few years. this has also spawned some other interests. gravity and coordination spring to mind. related to those interests, i went whitewater rafting recently, and play volleyball (or attempt to) with some friends from nda. hiking is also fun, and while i usually go for easier slopes like the blue hills, occasionally i'll go for something more difficult.

traveling has always interested me. as a kid my parents both worked in the school system, so most summers we ventured away from the great state of kansas. i bought a digital camera recently to try to make photo albums of my trips, since i procrastinate horrible with paper pix. since then i've traveled to buffalo, minnesota, and tampa (by way of buffalo and atlanta). less procrastination, but my forgetfulness has stayed the same.

my more passive forms of entertainment are football and the telly. the patriots. sigh. this was caused by my four year stint in buffalo, ny (guess which four years). it's now growing into a desire to move to a town with an nfc team. speaking of difficult causes, babylon 5. great sci-fi show. thick people distribute it. a more successful show is x-files, which receives a great deal of discussion on mondays here at work. and for sheer mindlessness i tune into e! to watch talk soup. if only they could come up with "car soup" where you just get to watch the accidents.

history, or "how did this all happen?"

in case anyone i knew long ago happens by this page, i started out in brooklyn, ny. of course, if you remember me from there, pardon if i have forgotten since i moved away at three. i lived in salina, ks and went to lowell elementary school. i then moved to huntington, long island (and even picked up an accent though i've thankfully lost it) where i went to huntington high school. after that it was off to school at suny at buffalo where i majored in computer science (never would have guessed, eh?) and then here to boston.

i'd like to thank jessica for being a great roomie/friend. vi for being an excellent editor. linux for being a great os, and red hat for being a great distribution. that bad shift key in the high school lab that helped me realize capital letters were evil things. friendly's for those awesome fudge swirl ice cream (sugar) cones that i don't eat that often anymore. skips for great ice cream that i now eat all too often, and paul for the ice cream ordering web page here at unifi. guinness and bailey's for excellent drinks (no, not together!). c for long conversations about nothing and everything.